Hey all, I’m new to VR Sketch but enjoying learning and utilizing it for a home building project. I’ve got a question in that I have an Oculus Quest 2 and am struggling to figure out how to tether it in order to have the processing done on the PC instead of headset to allow it to handle a semi large model. I’m running SketchUp 2022, VR Sketch 17.0.1 on the oculus and 17.0.4 on the PC. I’m able to send my model to my oculus over wifi via the “send to oculus” option in SketchUp but if I disable my wifi for instance on my PC and try that again while the two are tethered via cable it doesn’t work so I know it still defaults to wifi. There must be a different option that I’m supposed to select or it’s supposed to be done via the oculus app on the PC or something instead.

Any feedback you all could give me would be greatly appreciated. I’m just trying to find a way to handle a little bigger model without the stutter but can’t find any documentation on how to do it.

Thank you in advance,

You must not use the “send to Oculus” option in this case, but instead “send to VR on this PC”. This is because a tethered Quest 2 fully emulates PC VR. Before you pick this option: make sure that you have the right cable or a fast enough wifi connection (see for example https://uploadvr.com/how-to-play-pc-vr-oculus-quest-2/); then make sure the Oculus App is running on the PC; finally, click “Enable Oculus Link” in the Quest 2 headset (if not showing up automatically, you need to go to the settings’ front page).

Thank you very much, I got it going with your help. I had tried the “Send to VR on this PC” option before but didn’t know that I needed to have the Oculus app up on the PC and have launched the link on the headset itself first.

My issue at this point, and the reason for my attempt to let the PC do the work is that many lines in my models are jagged and seem to move in place as you look at them (even if not moving and model size and texture independent). Now that I got the PC to do the processing I was able to see closer to 70fps vs the 35 or so that the Oculus itself was capable of but the issue persists. I’m curious if you guys see the same thing or not and if there’s any remedy at this point or if it’s just a matter of waiting for the next Oculus maybe which will have more power. I did find that SideQuesting the headset and changing the “Default Texture Size” made a big difference but it certainly did not eliminate it. I’ve attached a screenshot that I took trying to show what I mean. If you zoom in a touch on the lines on the top of the island for instance you’ll see how jagged they look and in person they almost scroll around in place.

Any thoughts would be beyond helpful. 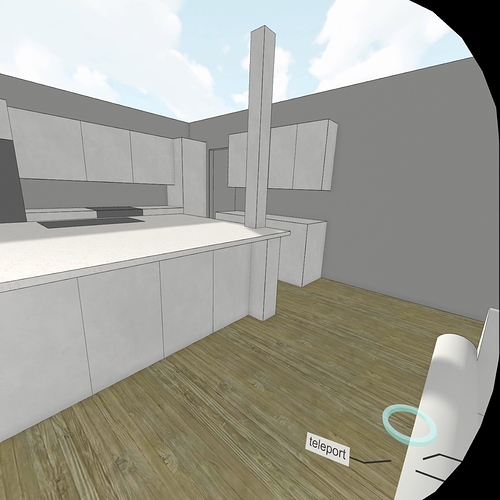 Rendering nicer lines in VR is actually a difficult problem, because of the combination of two factors: the relatively low resolution makes lines have a “step” effect even with some anti-aliasing applied; and the fact that the headset constantly moves a little bit makes some of these “steps” appear to move around a lot.

That’s the general answer, but we can look in more details at some cases. In your picture, do you mean a specific line, like the one I’ve highlighted in red? Or is the issue with any line? 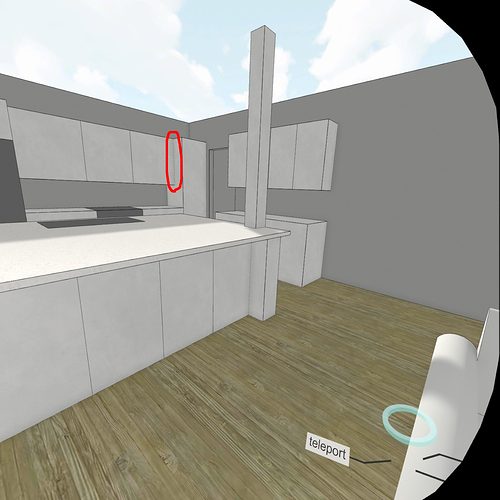 I can see that a few lines like the one highlighted in red are somehow less wide the the others, which makes them half-disappear. It draws only bits of the line and these bits must appear to jump around a lot more than the rest in VR. Is it what you’re talking about?

Thank you again for the quick response. Great information, I assumed it’s generally difficult to achieve in VR in it’s current tech stage and that it’s something that will just get better with time, just wasn’t sure if there were any tricks to make it better. The line you circled in red is one of many in the view at the time that appears to move/scroll in place. I’ve circled a few others in my reattached shot. I do find that it seems to be the worst on components like a door or window frame but in general it happens on many lines. I tried to capture it a bit in a video recording which I’ve uploaded here (https://drive.google.com/file/d/1ZSQVQ6T7QFgAOps4TNRDJb-JQAbpArJT/view?usp=sharing) but again, it looks well worse in the headset than it does on screen. Understanding the current limitations technology wise is this something you would expect to get better with the next Oculus headset (Quest 2 Pro) which is slated to release in the next few months?

Again, thanks a bunch for your help 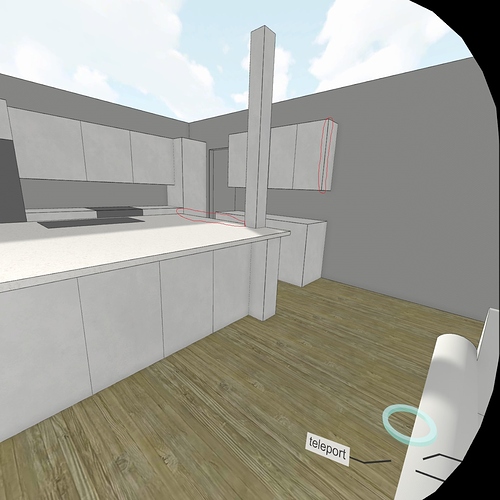 Quest 2 Pro: no, I don’t expect a 15% increase in screen resolution to make any real difference.

Hey Armin, One more question for you…I just picked up a new laptop as I was due for one anyways so I got one with a much better GPU than what I had and expected that I would likely see a solid increase in visual quality within VRSketch and in the end i found that if i go through the PC Oculus app with a link cable I actually get much less crisp lines than if i let the oculus do the work on it’s own. How is that possible? I’ve got a Radeon RX6700M, 64G RAM, etc so there shouldn’t be any hardware limitations on my side. Is there a setting I’m missing somewhere?

VR Sketch contains no logic to improve the visual quality on beefy PCs. The actual headset resolution makes a difference, and sometimes you can configure things in software but outside VR Sketch. For example, there are a few settings in SteamVR; I’m not sure there are any with the Oculus app, though. But in general, the only benefit you get from a high-end GPU is improved frames-per-second on very large models, not improved image quality. In particular, the issue we’re discussing here won’t just go away if you have a faster PC. In theory, this might be the case if the GPU or driver itself was aware of VR-specific issues with lines and improved them somehow. This is not the case as far as I’m aware.

Something else: the edges are rendered differently on a standalone Quest than they are on PC. This is done from VR Sketch on purpose: the Quest struggles to render too many lines, so instead of asking its GPU to draw the Sketchup edges as lines, we use a custom trick to make some borders of triangles appear black. As far as I can tell, though, the result is of lower quality (it is irregular), but I admit I mostly compared static pictures. I didn’t check if they would be less prone to antialiasing effects.

Maybe I should look again.