Is it normal that I dont see different styles in VR? For instance the ‘watercolor on paper’ style in my model does not show in VR

Yes, styles are ignored by VR Sketch as a whole.

SketchUp styles do change some of the settings that are copied to VR, like whether the edges are visible or not. But not all the settings from styles can be directly copied into VR. For example, a background image that fits the screen can’t directly be used as an all-direction skybox. And I’m not too sure about the various styles in which to draw edges—does it work well in VR too? Keep in mind that we need to make the edges something that really exists in 3D, not just on a 2D screen, or else we would be running into issues like it’s drawn correctly for each eye independently but seeing it with two eyes doesn’t give the correct depth impression…

In summary, each of the many settings from styles needs to be thought about on its own. So far we only did the most basic ones. We could support a few more, like the edge color, the faces that are see-through, a uniformly-colored background. The rest is likely to be either a lot more work or just not workable at all for VR.

Also note that many of the advanced styles are there to change the way it looks specifically on screen. Try to look at one of these styles (say “Pencil Sketch with Darker Traced lines” from “Style Builder Competition Winners”). Notice how some edges abruptly change when you rotate the camera around. This is typically something that cannot be done in VR: each eye would see a different drawing because the angle of view is slightly different (urgh); and moreover you’re constantly wobbling a bit, unlike on screen which doesn’t rotate at all once you release the middle mouse button—so these details would constantly change and what you see isn’t stable (urgh).

Dear arigo,
actually edge colours would be highly appreciated !
I am testing “hidden line” style with coloured edges.
PLs compare attached sample picture.
Would you be able to allow for this look in Sketch VR?
This would actually be a huge thing for me - i have not found any VR solution yet that will do this (simple) style.
pls let me know what you think.
Bjoern 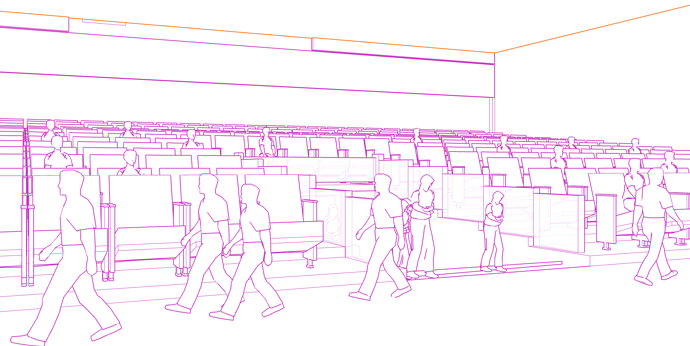 It may take a few iterations to get the style as you really want it, because there are details that we don’t think about that are specific to VR. We can easily try, though. I can give you a special version of VR Sketch that always renders like this. It is very easy for me to do—the hard work will be later, if we decide it is a good idea, I’ll have to update the Configuration dialog box to let the user select custom colors and style variants. Do you need a version of VR Sketch for Windows PC, or for the Oculus Quest standalone?

Hi Armin,
i wish you a healthy start in a happy and adventurous 2022!
Sorry i have missed your reply and took a couple of days off.
Actually we need an “orange” style (hex: #fe7018), not “purple” like in the picture above.
Wow - thanks for your kind offer: would be great to test this, i am using the Quest 2 stand-alone since i have no link cable to hand or air link set up for now. But i can get one if it makes thinks more easy.
With the Oculus charging cable the sketch-VR-App will not start but i think i will be able to sideload an app (i have not done yet, but i read this article (https://uploadvr.com/sideloading-quest-how-to/) and think i can do it).
let me know what works best for you.
kind regards
Bjoern

Hi Bjoern,
Happy new year to you too!

Here is an APK file to test it out. You should be able to install it with the charging cable (or any other that ends in a USB-C connector on the Quest). We’ve documented it here, too: https://vrsketch.eu/docs-getting-started-quest.html “Installation without using the App Lab”.

In this test file, you need to open the configuration dialog (cogwheel icon in VR), go to the Options page, “Performance trade-off”, “Speed”.

Note that the lines are only visible where there would be Sketchup edges to draw. If you mask some edges in Sketchup, they won’t be drawn in VR Sketch either.

Please tell me if this is exactly what you want, or if you’d prefer that there was still some minimal visual feedback on where the faces are. For example, we could make them not exactly uniformly all-white, but very slightly darker depending on their orientation; I think this would make the 3D space much more obvious for the person in VR.

Another note: on Quest the rendering of edges is optimized differently than on PC. As a result, the edges are a little bit irregular. On PC, they are regular, but they are not as crisp as on screen, because the angular resolution of any VR headset is still much lower than that of a PC screen.

If the irregularities are a problem, or if the scene you want to look at is too complex to render smoothly on the Quest, then you should consider using the Oculus Link connection with a Windows machine with a good graphic card.